I'm constantly surprised by how many people around just don't like seafood. I'm in the South, so it's not exactly Kansas. Catfish, shrimp, and day-fresh catches from the gulf are kind of a common thing. Still, I run into lots of folks who just can't be bothered with seafood, or if they do, they only indulge if it's paired with that other southern past time - deep frying. I would never want to disparage a good piece of fried fish, especially some catfish fried in cornmeal with the tail fin included (it's the best part we keep from Yankees). With that said, let's level. Eat some fish. Get crazy. Live a little. It won't kill you, it's easier than you probably think it is, and the worst part is that you'll probably like it.

When I'm confronted by someone who claims they "don't like fish" and I eliminate vegetarianism/veganism from the possible reasons, the next one up is that "it's fishy". The smell, or the taste, it's just a tell-tale funk. The problem isn't the fish. Well it is, but it's not an unavoidable one. "Fishy" fish isn't fresh fish. That smell and taste is from fish that is either off or in the process of going off. Fish has a much shorter fuse than beef, poultry, pork, etc. You can't park it in a fridge on Monday with aspirations of a weekend menu. Just doesn't work the same way. Believe me, I thought I could get cute with a piece of sea bass a few years ago and bought two days before I was ready to use. What was a nice piece of fish then (and it was, paid out my nose for it from Whole Foods) was rank trash when I was ready to put it on a bed of risotto. Disaster!

Assume I'm talking nonsense. Go ahead. Do this if you're skeptical. Go to a Japanese restaurant with a friend who's into sushi. I assume if we're having this conversation you'll be having something else, but before you do, get a good whiff of their sushi. Whatever you smell, it's not going to be that low tide funk you're dreading. That's fresh. Sushi places can't fake it, and they can't push crap to you. Now ask yourself why you're afraid of that stink? Because there's a bunch of people who do push dodgy seafood on people, and too many people don't send it back, they just assume they don't like seafood.

There's a counter at the seafood section of your grocer for a reason. You need to be having some face time with the person who you're buying this stuff from. Ask them questions. When did they get their fish? From where? Most probably won't know the second question and unless you're really into locavore stuff you probably won't care, but you can certainly look at and smell the wares. If they won't let you or you can't get that kind of access, take your business elsewhere.

But seriously, eat some fish. Hell, I'll even give you an easy one:

When you find that honest fishmonger, look at their salmon. I'm gonna throw you a curveball now. Get the one with the skin. Fine, get all the "ewwwws" out of your system. It's silver and shiny and weird I know. Trust me. Get the skin-on salmon because that skin is fish bacon, and I'm gonna show you why you want it.

So make sure you have all this stuff:
Preheat your oven to 350. Cut your salmon into meat cubes and lay them in a pyrex baking dish, skin-side up. Melt your butter and mix with the lemon juice, parsley, scallions, and garlic. Now lay your asparagus stalks between your fish and pour the butter mixture over that. This part's important here - don't pour the mixture over the skin. In fact, once you pour that over, blot the salmon skin dry with a paper towel and brush the olive oil on top, then apply salt and pepper to it. You don't want any water on that skin, because it's gonna get crispy. Bake that salmon about 8 minutes or so. When it's done, pop the dish under the broiler for another three or four. 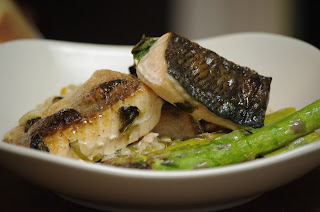 Mix the pan juices and butter with your grains, then add your asparagus and fish to the plate. The skin will snap under your fork and crackle, like bacon or a perfect baked chicken skin. The meat under that skin will be absolutely tender and cleave along the grain with no effort at all.

That's about 30 minutes of work, if that. Best of all, you don't have to fuss with it to make it something it's not. It's exactly what it is, a perfectly cooked piece of fish. If you've sourced a good one, you'll knock this meal out of the park. While you can serve this to pretty much anybody with a pulse, I suggest making it a romantic dinner. I am a huge fan of impressing my wife without having to actually make any significant effort, and she was a big fan of this. It also pairs with chardonnay and I almost never drink that crap since I never have a good excuse, so go nuts.

I'll be putting up a few other seafood ideas here in the next few weeks, including stuff a little more casual than this. All I ask is that if you're on the fence and picky when it comes to fish and such, you give me the benefit of the doubt for at least one of 'em.

This is fantastic chuckles! So glad u have blog! Mae

My next planned meal. Thanks!!!!

Great photo and recipe! I love seafood, I don't understand people that don't like it either, it's delicious.

It’s very easy to find out any topic on net as compared to books, as I found this post at this site.

Glad that I stumbled upon your blog. Me being a sea food lover going to follow your threads.

About the guy writing this stuff

Chuck
Alabama, United States
I'm a 32 year old married guy who, years ago, needed a hobby that was less expensive than other hobbies I was into, so I started to cook. Sometimes that meant I made something good, and sometimes that meant I made something terrible and had to just grin and bear it. That I'm still married means I haven't offended my wife too badly, so I decided to put a few things that worked on a blog in the hopes that somebody else might be able to pass it on. I've never been one for secrets, so everything here is open source and you're free to ruthlessly copy recipes as you please. I do this lots of times. I only ask that you change a thing or two about something you like and make it your own. You'll usually like it better that way.